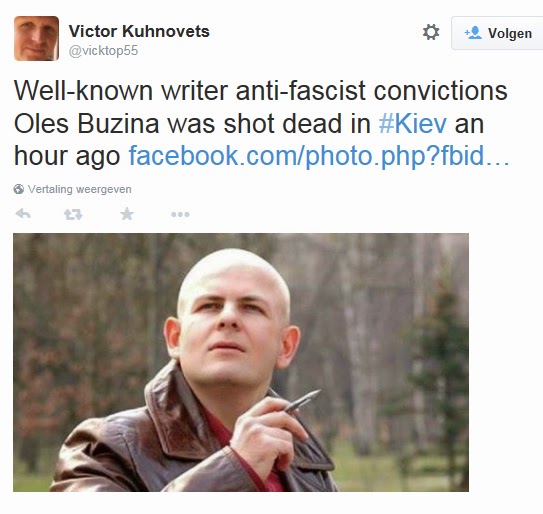 Journalist Oles Buzyna (45) has been murdered yesterday in Kiev. His "colleage" reporters over here in The Netherlands dive into this murder instantaneously and do some exhaustive research into the matter. NOT!

This is the perfect time for some more Western anti-Russian propaganda. Not one media outlet reports his anti-Kiev, or even better anti-fascist stance. Instead they all call him "pro-Russia".

Click the image to see the wonderful Dutch reporting on their colleage journalist.

Next to that they give the word to the regime in Kiev, and they reassure us an independent and  swift investigation. Pfew, that's a relief!

Poroshenko said it was a deliberate provocation which plays into the hands of our enemies, destabilising the political situation in Ukraine. The same kind of sound came from Ukrainian interior ministry official Anton Gerashchenko. So Russia did it, again!

They also included the death of Oleg Kalashnikov (52) less then 24 hours before the murder of Buzyna. Although he was found on the frontlawn, they claim it's unclear if this was murder or suicide... I think it was suicide, since this seems to be a trend for "Pro-Russians" in Ukraine lately...

Both men were important witnesses in the Maidan massacre investigation, in wich pro-western protesters got killed. Are they talking about this?:

So i decided to do an international search, and read this:
"Interior ministry advisor Anton Gerashchenko said police had opened a murder investigation into Kalashnikov's killing which will examine his political activities as well as other possible motives.

"I do not exclude the possibility that these murders were organised by Russian special services to create an atmosphere of terror in Kiev, an atmosphere of hysteria, to show what happens to people who were against Maidan and against the new government," Gerashchenko said."

One question nobody seems to ask is:

And the same goes dor Kalashnikov, and the rest of Kievs political oponents!