Ukraine and the evil snake that is the U.S. State 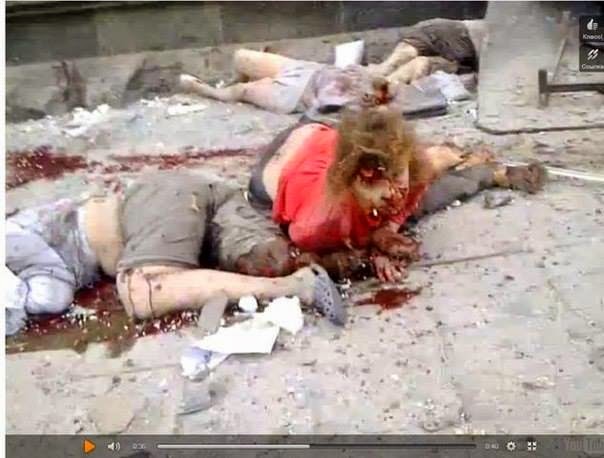 Strike - Inside Building
http://youtu.be/Lj6jrmX4ULY?t=26s
Five civilian women were killed in this attack. In a video of the aftermath women in casualwear can be seen, with mutilated legs in one case, others quite clearly dead. One woman still alive but with skin gouged out of her leg.
A scene from World War II could not have looked bloodier. 8 people died in all and many have been injured/mutilated for life. All civilians.
The videos you will find if you look for them on YouTube are among the most graphic you will ever watch. But I suggest you SHOULD watch them.
You will perhaps say that surely the world was shocked and dismayed that such an atrocity could happen, that ANY government could do it in this day and age and that organisations across the western world were outraged and condemned this massacre.
But you would be disappointed. Because there was a perfect silence across the whole western world.
Why?
For the same reason that the Lugansk atrocity has no doubt come as news to YOU. There was in effect an almost 100% news blackout on this right across the western world. The screams of the civilians who suffered incredible agonies while in their death throes were completely silenced
George Orwell’s ‘1984‘ world of two fighting superpowers where all news is manipulated news has come to pass. And where reality or non-reality is at the behest of the governing power. We are no longer living in the world we thought we were. A sinister ability to silence all press and media is now revealed. And in that silence no one can hear their screams except those NEXT to die.
And the future of Ukraine? It is tied in with the future of the virulent and paranoid fear of Russia which drives so much incredible hatred in the souls of some Ukrainians and some westerners, certainly including the so-called leadership of the US and EU.
Russia, China and some other BRICS plus countries in Latin America, Syria, Iran and others are now building the elements of the multipolar world that was lost as the communist (socialist) bloc fell. But not in terms of re-building the USSR. No, Russia will never go back to those conditions which incorporated deep flaws (for all the magnificent ideals and achievements). But the US and EU MUST be faced down and quarantined for they are lethally insane in their ambitions, in a state of near collapse internally with EU-skepticism growing EU is particularly vulnerable. And the US is so deeply sick with innumerable causes that it is only a matter of time before it suffers an internal vortex of collapse, decay and violence.
But the US and EU are even MORE dangerous in these parlous states. Obama in US was seen as an agent of change similar to John F. Kennedy. He has turned out to be nothing of the kind.
We should realise that whoever takes over in 2016 will without doubt be even worse. Best case scenario would be that the administration then would simply carry on as it is now with no worsening of the NeoCon insanity which permeates each level of power in Washington.
The danger which constantly emanates from the US means we MUST use every legal means possible to undermine its ability to continue to interfere across our planet.
Most people have few possibility other than their own boycotts or use of internet to protest. But we CAN speed the economic decline and collapse of the US economy by refusing any and all goods or services with an American origin. It’s not much but it’s something.
Apart from this get onto Twitter and condemn American interference with all your might. And the obnoxious junta in Kiev. And to go on doing so night and day. You will find many friends there who are part of the same dedicated team of pro-Autonomy tweeters. They are a lovely, incredibly idealistic bunch. You’ll LOVE them.
Protest the American state and its ambition to gain world hegemony. Support those who act to  remove countries from the EU. The primary goal is to bring the EU to its knees, a result desperately needed as it has become, in effect, America’s lapdog.
So, that’s my penny’sworth on where we are on Ukraine, on the mangy parrot of the EU and the primary driving force of evil in our world, the evil snake that is the U.S. state.