The School of the Americas: Class over? 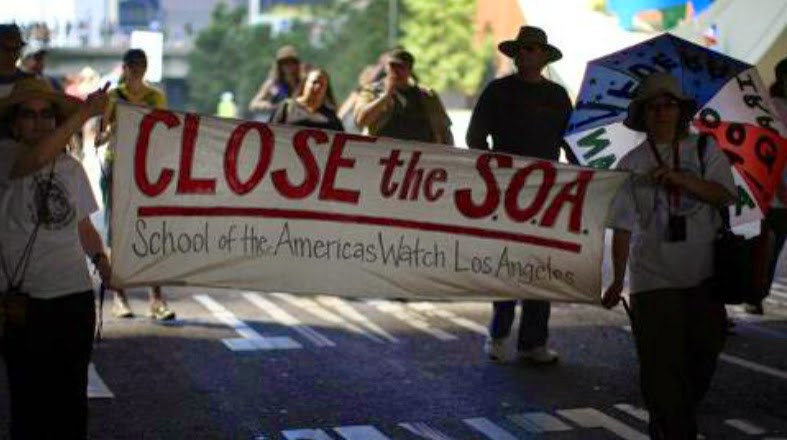 Al Jazeera Americas - Inside Story - The School of the Americas: Class over? (2012)

Some of Latin America's most notorious dictators graduated from the military academy in Fort Benning, Georgia.

From Argentina and Chile, to Colombia, Guatemala and Mexico, there are few countries in Latin American untouched by the School of the Americas. Based at Fort Benning in the US state of Georgia, the military academy has trained 65,000 Latin American soldiers over six decades. And its roster of graduates who eventually came to lead their countries is impressive - were it not for the fact that they are considered some of the continent's most notorious dictators of the last century. Overall, the School of the Americas has produced soldiers and generals responsible for the massacre and torture of tens of thousands of people across Latin America. From among its infamous alumni are 11 former Latin American dictators including: Argentina's Leopoldo Galtieri, Rios Montt of Guatemala and Raoul Cédras of Haiti. Other notorious graduates include: El Salvador death squad leader Roberto D'Aubuisson who killed and tortured thousands during El Salvador's civil war. As it stands six countries have withdrawn their troops from the school; they are Argentina, Bolivia, Venezuela, Nicaragua, Uruguay and Ecuador. But decades on from the Cold War, the school's influence is still being felt today: four of its graduates helped orchestrate the 2009 coup in Honduras. Understanding such consequences requires little stretch of the imagination when considering what attendees were being taught. Training manuals that were used were declassified in 1996. They advocated the use of fear, payments of bounties for enemy dead, extortion, beatings and false imprisonment, as well as the use of truth serum. The term "neutralisation" was also used - which the US department of defence has admitted is a euphemism for illegal execution. Outraged at its programme, the US House of Representatives voted to close the school in 1999 but it opened almost immediately afterwards under a different name. Sixty-nine House members renewed the call for its closure in a letter to Barack Obama, the US president, last year. This week, leaders of School of the Americas Watch, which campaigns for the permanent closure of the institution, went on trial in Washington DC on civil disobedience charges. So we ask: What role does the School of the Americas play in Latin America now?

Joining Inside Story Americas, with presenter Shihab Rattansi, to discuss this are guests: Hector Aristizabal, a Colombian torture survivor; Nico Udu-Gama, an organiser from School of the Americas Watch; and Peter Kornbluh, a senior analyst from the National Security Archive.

FACTS ABOUT THE SCHOOL OF AMERICAS: