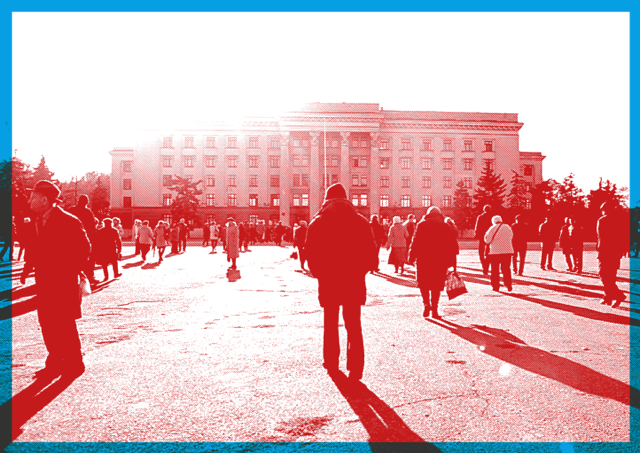 Independent German journalist Ulrich Heyden, creator of "Wildfire" (Lauffeuer), a documentary film about the events of May 2, 2014 in Odessa Ukraine, presented his picture at the Rossiya Segodnya International News Agency in Moscow on Friday.


Wildfire documents the events of the fateful day in May when a group of pro-Kiev radicals are alleged to have trapped and burned dozens of anti-government activists alive in the House of Trade Unions Building in Odessa, the picturesque Black Sea port city. Heyden conducts an independent journalistic investigation into the events, reflecting on recently uncovered evidence and presenting eyewitness testimony.

The film, presently available in Russian and German, begins in the run up to the Trade Unions Building fire, goes over the events, and features commentary from eyewitnesses on both sides. Screened in Berlin last month, Heyden noted that despite a favorable response, German media virtually ignored his work, while German television has made no offers to broadcast it.

"I feel that Germans have questions about what happened, and usually such films are shown. I have a feeling that about 30 percent of Germans would like to see this film," Heyden, a journalistic veteran with over 20 years' experience in Russia for a variety of German newspapers, noted.

Heyden plans to add subtitles to the film in several other languages, and to make it available for viewing on the internet, free of charge. Asked whether he would like to continue creating works on the crisis in Ukraine in the future, he noted that he does, but only when he saves enough money and has more time to devote himself to doing so. "I personally and several friends would like to do so, but after such hard work it is necessary to have a breather. Furthermore, this is volunteer work, so we will need to find sponsors with a good reputation. In this conflict, we as journalists must not take money from interested parties; therefore it will be difficult to find the necessary financing," Heyden noted.

"I am an optimist by nature and, on the basis of all my work in journalism, sincerely hope that the truth will win in the end," Heyden added.

Russian journalists watching the screening and meeting with Heyden afterwards commented that the film was objective, taking account of the opinions and positions of all sides associated with the events. News and analysis site Ukraina.ru editor Alena Berezovskaya commented that "the most difficult feeling is that of powerlessness; to change something, to have an impact," this is the goal for journalism. Berezovskaya voiced her gratitude to Heyden for risking his personal safety, for spending his money and time "in the aims of finding and communicating the truth."

Russian Civic Chamber member Maxim Grigoriev agreed with Berezovskaya, noting that "the fact that independent journalists like you exist is a great blessing for international journalism; this [film] is an act of serious civic courage."

Yuri, a man claiming to be an eyewitness to the film's subject matter, noted that Heyden's film put things in perspective, and reminded even witnesses about important details. "For example, your film talks about children in the House of Trade Unions. And yes, there really were children there, but I think that this is the first film that openly talks about it, that notes that they were there, and their fates remain unknown to me." Yuri added that "this tragedy will not remain only in our memory, and an investigation will [eventually] be held. Those who organized and participated in this punitive action will sooner or later be punished for their crimes, and perhaps your film will in some way assist in this process."

On May 2, 2014, rival rallies broke out in the southern port city of Odessa supporting and condemning the Euromaidan coup-empowered government in Kiev. Pro-Kiev protesters, including football hooligans and members of Right Sector militia, are alleged to have blocked anti-government protesters in the House of Trade Unions in the center of the city. The building was then set on fire, resulting in the deaths of 48 people and injuries to over 200 others, according to official statistics. Local public figures including Odessa's regional parliament MP Vadim Savenko, however, have accused Kiev of covering up the true death toll, saying that it maybe be as high as 116.

A film examining the arson attack on Odessa's Trade Unions House at the start of the civil war in Ukraine and the role played by ultranationalism, the police and politics in post-Soviet space. The documentary takes a look at a key event in the conflict and documents a city torn apart as a result of this tragedy.
Gepost door De Grijze Duif op 15:31