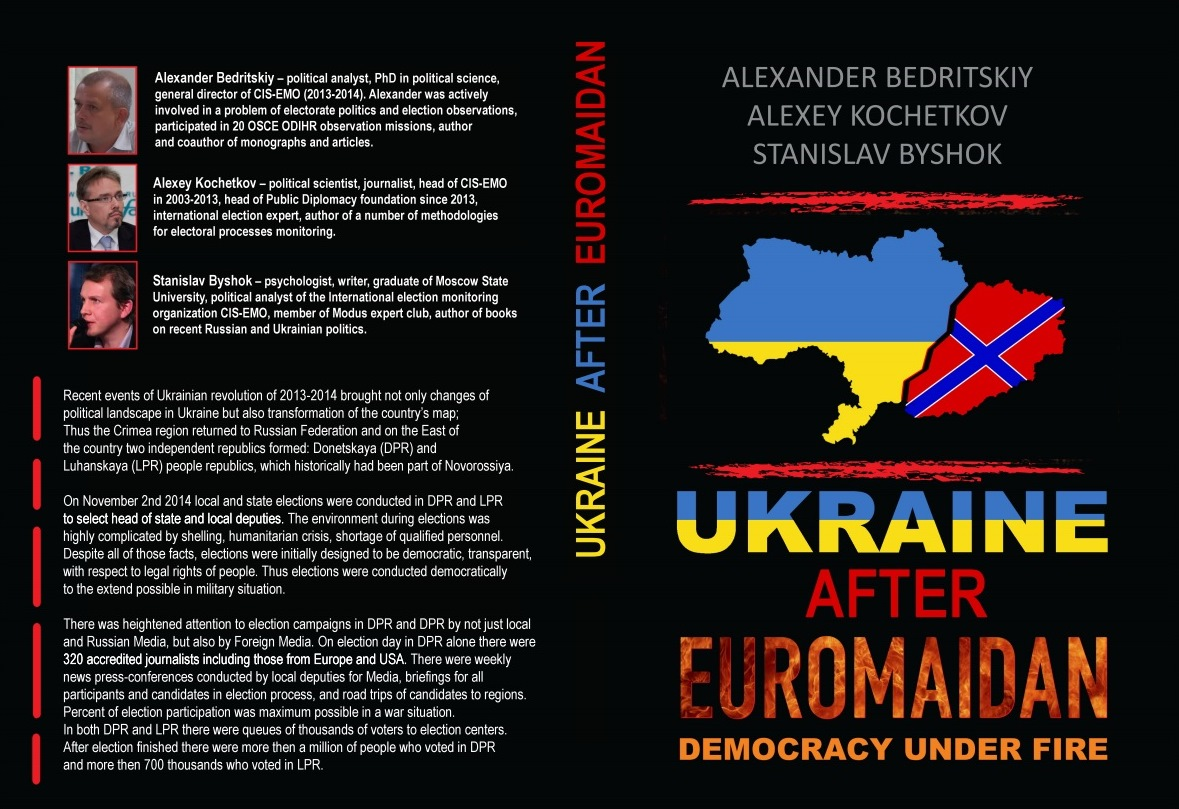 
The book "Ukraine after Euromaidan: Democracy under fire" which is devoted to the 2014 coup in Ukraine and the chain of events that followed, including the war in the East Ukraine and establishing of the People's Republics in Donetsk and Lugansk regions, is available for free download in PDF (1.3 MB).
The events of the Ukrainian revolution of 2014 brought not only changes of the political landscape of the country but also transformation of Ukraine's very map. Thus, the Republiс of Crimea returned to Russia, and in the East of the country two new republics have been formed: Donetsk People's Republic (DPR) and Lugansk People's Republic (LPR), which historically were part of Novorossiya.
On November 2, 2014, local and state elections were conducted in DPR and LPR. The environment during elections was highly complicated by constant shelling, humanitarian crisis, shortage of qualified personnel. Despite all those facts, elections were initially designed to be as democratic and transparent as possible in the given circumstances.
There was heightened attention to the election campaigns in DPR and LPR by local, Russian and West European media. On the election day, in DPR alone there were 320 accredited journalists including those from the West Europe and USA. There were weekly news press-conferences conducted by local deputies, briefings for all participants and candidates in election process, and road trips of candidates to regions.
Percent of election participation was maximum possible in a war situaton. In both DPR and LPR there were queues of thousands of voters to election centres. Eventually, there were more than a million people who voted in DPR, and more than 700 000 those in LPR.
Authors:
Alexander Bedritskiy - political scientist, PhD, CEO of CIS-EMO (2013-2014), participant in 20 OSCE ODIHR election observation missions, author and co-author of monographs and articles.
Alexey Kochetkov - political scientist, journalist, CEO of CIS-EMO (2003-2013), president of the Public Diplomacy Foundation, international elections expert, author of methodologies for electoral processes monitoring, author of books on Ukrainian and CIS countries politics.
Stanislav Byshok - psychologist, political analyst of CIS-EMO, expert on political extremism, author and co-author of books and independent reports on the contemporary Russian and Ukrainian politics.

FREE DOWNLOAD "UKRAINE AFTER EUROMAIDAN: DEMOCRACY UNDER FIRE" IN PDF