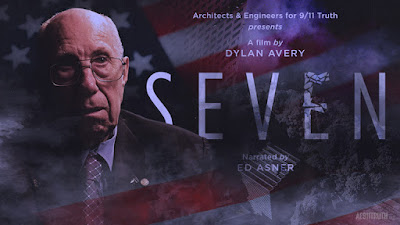 This 45-minute film, directed by Dylan Avery and narrated by beloved actor Ed Asner, tells the story of World Trade Center Building 7 — from its jaw-dropping “collapse” on 9/11 to the government’s blatant cover-up to the intrepid study by Dr. Leroy Hulsey and his Ph.D. students at the University of Alaska Fairbanks.
Kevin Ryan, over wie we al eerder uitgebreid publiceerde, schreef een review over Seven. Deze is te lezen via OffGuardian, en AE911Truth gaf daarvan de onderstaande korte samenvatting:

“SEVEN documents the journey of Professor Hulsey and his team from their introduction to the subject
and the related evidence to the final publication of their report in March of this year. . . .

“[T]he strength of the film is in exposing the viewer to scientific facts and evidence as described by credible experts like Hulsey, Angle, Grainger, Obeid, and Szamboti. . . .

“Professor Hulsey comes across as very credible and driven by the desire for an objective approach that gives the public an understanding of what happened to WTC 7. . . .

“If people want to help reveal the truth about WTC 7, and therefore about 9/11, they should share this film with every scientist and engineer they know.”