The Century of the Self (Adam Curtis) 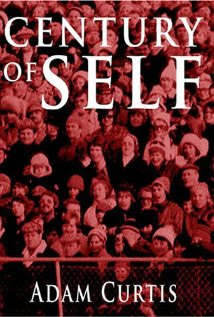 Deel 1:
The story of the relationship between Sigmund Freud and his American nephew, Edward Bernays. Bernays invented the public relations profession in the 1920s and was the first person to take Freud's ideas to manipulate the masses. He showed American corporations how they could make people want things they didn't need by systematically linking mass-produced goods to their unconscious desires.

Bernays was one of the main architects of the modern techniques of mass-consumer persuasion, using every trick in the book, from celebrity endorsement and outrageous PR stunts, to eroticising the motorcar.

His most notorious coup was breaking the taboo on women smoking by persuading them that cigarettes were a symbol of independence and freedom. But Bernays was convinced that this was more than just a way of selling consumer goods. It was a new political idea of how to control the masses. By satisfying the inner irrational desires that his uncle had identified, people could be made happy and thus docile.

It was the start of the all-consuming self which has come to dominate today's world.

The Century of the Self - Part 1: "Happiness Machines"
﻿

Deel 2:
This episode explores how those in power in post-war America used Freud's ideas about the unconscious mind to try and control the masses.

Politicians and planners came to believe Freud's underlying premise - that deep within all human beings were dangerous and irrational desires and fears. They were convinced that it was the unleashing of these instincts that had led to the barbarism of Nazi Germany. To stop it ever happening again they set out to find ways to control this hidden enemy within the human mind.

Sigmund Freud's daughter, Anna, and his nephew, Edward Bernays, provided the centrepiece philosophy. The US government, big business, and the CIA used their ideas to develop techniques to manage and control the minds of the American people. But this was not a cynical exercise in manipulation. Those in power believed that the only way to make democracy work and create a stable society was to repress the savage barbarism that lurked just under the surface of normal American life.

The Century of the Self - Part 2: "The Engineering of Consent"


Deel 3:
In the 1960s, a radical group of psychotherapists challenged the influence of Freudian ideas in America. They were inspired by the ideas of Wilhelm Reich, a pupil of, who had turned against him and was hated by the Freud family. He believed that the inner self did not need to be repressed and controlled. It should be encouraged to express itself.

Out of this came a political movement that sought to create new beings free of the psychological conformity that had been implanted in people's minds by business and politics.

This programme shows how this rapidly developed in America through self-help movements like Werber Erhard's Erhard Seminar Training - into the irresistible rise of the expressive self: the Me Generation.

But the American corporations soon realised that this new self was not a threat but their greatest opportunity. It was in their interest to encourage people to feel they were unique individuals and then sell them ways to express that individuality. To do this they turned to techniques developed by Freudian psychoanalysts to read the inner desires of the new self.

Originally broadcast on 2nd May 2002.

The Century of the Self - Part 3: "There is a Policeman Inside All Our Heads; He Must Be Destroyed."


Deel 4:
This episode explains how politicians on the left, in both Britain and America, turned to the techniques developed by business to read and fulfil the inner desires of the self.

Both New Labour, under Tony Blair, and the Democrats, led by Bill Clinton, used the focus group, which had been invented by psychoanalysts, in order to regain power. They set out to mould their policies to people's inner desires and feelings, just as capitalism had learnt to do with products.

Out of this grew a new culture of public relations and marketing in politics, business and journalism. One of its stars in Britain was Matthew Freud who followed in the footsteps of his relation, Edward Bernays, the inventor of public relations in the 1920s.

The politicians believed they were creating a new and better form of democracy, one that truly responded to the inner feelings of individual. But what they didn't realise was that the aim of those who had originally created these techniques had not been to liberate the people but to develop a new way of controlling them.

Originally broadcast on 3rd May 2002

The Century of the Self - Part 4: "Eight People Sipping Wine in Kettering"