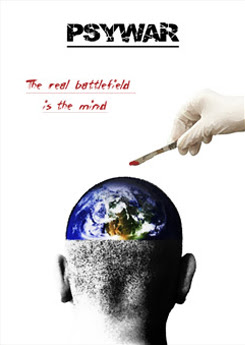 Review of “Psywar” from Kim Petersen at Dissident Voice

Psywar is a sterling debut documentary from writer-director Scott Noble. It is chock full of interviews with thinkers, historical background, and excellent narration by Mikela Jay.
Psywar explores the evolution of propaganda and public relations in the United States, with an emphasis on the “elitist theory of democracy” and the relationship between war, propaganda, and class.

This film is designed both as an introduction to the concept of psychological warfare by governments against their citizens and as an exploration of certain dominant themes in American propaganda. Significant time is also devoted to different conceptions of “democracy” as theorized by figures like Walter Lippmann, Edward Bernays, and the “founding fathers” of the United States itself.

Psywar illuminates how the state of the world reached the point it is at today: where an imperialist United States wages several wars abroad and maintains the support of its people, despite a growing and yawning chasm between the haves (who profit from warring) and the have-nots (cannon fodder deluded by unquestioning patriotic idealism). The US has managed to drag its fellow capitalist nations along in more-or-less support of its imperialist aggressions.

People who analyze the state of the world and consider the manifest moral and humanitarian violations might be forgiven for shaking their heads that such a whopping segment of humanity could go along with such inequality, such carnage, such insouciance.

Psywar begins by looking at how people’s distorted perceptions are crafted and maintained
In the opening segment of Psywar, there is video footage of American soldiers defacing a statue of Iraqi president Saddam Hussein with the Old Glory. It was a staged event by psyop group. The film then segues into another infamous pysop about the fallen American soldier Jessica Lynch. Both events were disinformation campaigns that deliberately misreported events.

John Rendon, an “information warrior and perception manager,” is a major player in the $200 billion a year perception-management industry. Rendon is the figure who orchestrated the effort to sell the American public on a war against Iraq. The American public was buying it early on. At best, it can be stated the government thought highly enough about the public acumen that it resorted to disinformation; at least public perception matters.

The corporate media is heavily complicit in the warmongering and warring, even to the extent that psywarriors at CNN “helped in the production of news.”

Psywar points to a synergy: “The invasion of Iraq represents a pinnacle of domestic psywar in the United States, an unparalleled integration between [sic] public relations firms, corporate media, and military psyops.”

The perception management was so powerful that even soldiers were so deceived that they engaged in the greatest crime as defined by the Nuremberg Tribunal at the end of World War II: aggression.
Perception management is “steeped in class warfare.” Psywar tells the story of the exploitation of workers by the wealthy Rockefeller family. Striking coal miners seeking better working conditions and pay were attacked by the National Guard who were in the pay of the Rockefeller family. It is known as the Ludlow Massacre.

In one of his last videotaped interviews, historian Howard Zinn explains the dilemma of the working poor against plutocrats such as the Rockefeller family.

The Ludlow Massacre was a PR nightmare for the Rockefellers. An early psywarrior, Ivy Lee was instrumental in attempting to rehabilitate the image of the Rockefellers. His public relations involved smears and disinformation against the coal miners and their supporters. As Psywar mentions later in the film, Lee would later propagandize for Nazis against Americans.

Early on, it became clear that public perception needed to operate behind the scenes. Staged PR was arranged, such as charity.

Richard Coniff, author of A Natural History of the Rich, challenges the philanthropy of rich – stating that the rich hold a “functional view of wealth rather than a strictly charitable view.”

Zinn agreed, noting that charity can be exploitative and that the American system is exploitative. Zinn said that the “system is maintained […] by giving people a little bit, and giving enough people just enough to prevent them from breaking out in open rebellion”

In the second part of the documentary, Noble looked at propagating the faith. It begins with Graeme MacQueen, co-founder of the Center for Peace Studies. He also holds that the support of the people is necessary for war. However, he said “war is disgusting to most people”; therefore great psychological pressure is brought to bear upon soldiers.

National Security is there to swindle people
Christopher Simpson, author of The Science of Coercion, says propaganda is about mindset and ideology.
Recognizing this, Psywar relates how president Woodrow Wilson helped cast the propagandistic George Creel Commission which would pave the way for the US to enter World War I by planting false atrocity stories, stoking fear in Americans and calling on them to fight the good fight for democracy.
The propagandist firm of Hill and Knowlton arranged an infamous staged op as a prelude to an assault against Iraq. A teenage girl, Nasriyah, cried crocodile tears and lied about babies being ripped from incubators by Iraqi soldiers. The false story moved American sentiment to back military action against Iraqi soldiers in Kuwait.

Patriotism is the sentiment widely relied upon by governments to attain their ends against foreign foes. Historian Michael Parenti appears to challenge typical notions of patriotism. He identifies patriotism as being about greater values than attacking foreign lands; he sees it as about social justice, peace and stability, an end to racism, etc.

Another problem identified as preventing a public solidarity was that unions were based on gender and ethnicity.

Historian Sharon Smith said a breakthrough came with the anarcho-syndicalist union the Industrial Workers of the World (better known as the Wobblies) which set out to organize and include women, immigrants, and African Americans in one big union.

Anarcho-syndicalist scholar Noam Chomsky holds that it is natural for humans to free associate.
The unity among humans is thwarted by a state which uses war to accumulate power and by corporations to gain enormous fortunes. The Left worldwide labor movement is in disarray
In part 3, We the People, Psywar elucidates on how people are pawns in a system set up in favor of the wealthy.

The existence of democracy is refuted. Chomsky calls elections “a marketing exercise.”
Says William I. Robinson, editor of Critical Globalization Studies, we live in polyarchy: “a system of elite rule.” That is the way the system was designed to be.

Historian John Manley states that the so-called founding fathers were slave owners who sought to protect propertied interests. To this end, the Constitution was crafted behind closed doors. Chomsky notes that James Madison, the major framer of the Constitution, designed it to protect the opulent from the majority.

Littler known is that the US Constitution is based on the Kaianerekowa (Great Law of Peace) of the Haudenosaunee (called Iroquois in Psywar). Stephen M. Sachs, author of Remembering the Circle, lists how the Kaianerekowa allowed the Haudenosaunee to easily remove corrupt leaders, that women had a major role in decision-making, that everyone was involved in policy formation, thus creating a participatory society.

One weak link stood out in Psywar. Why did the film turn to a white man to tell the history of “native Americans”? Why not talk to one of the Haudenosaunee?

The final part of Psywar is Consumers. People are indoctrinated to see themselves as consumers. Advertising reminds people of this. The system would have people work to consume. To this end, the emphasis is on work, not leisure. It is feared that less hours of work might foment radicalism.

The system is reeling now. Neoliberalism calls for cutbacks and results in increasing inequality. Parenti said we are back to about 1900 in terms of inequality. “People are poor because they are paid less than the value that they produce. You need poverty. Poverty is needed if you are gonna have wealth.”

Psywar argues that it is the monopoly media’s relentless propaganda that holds up capitalism. Democracy and capitalism are argued to be mutually exclusive. If capitalism is sacrosanct, then you can not have democracy.

“Behind political democracy was economic equality.”

Psywar tells the story of how and why the world is the way it is now. It tells of the system, why it was concocted and why it is kept in place.

Knowledge is requisite to combat propaganda and disinformation. It is necessary to overcome the system and to erect a people-centered system that respects the needs and aspirations of the society as a whole. Psywar makes clear that public opinion is important. If it were not important, then there would be no need for perception management. It is the incessant propaganda and disinformation that creates a perception of reality. Noble reveals the framework that exploits class, race, gender, and resources to benefit the already wealthy at the expense of the masses.

Psywar is a documentary that augurs well for future filmmaking by Noble who made the film for $1500 while working a blue collar job. It is a good example of the democratization of filmmaking occurring via the internet.