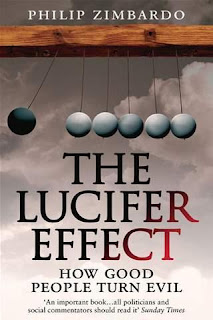 Philip G. Zimbardo, Professor Emeritus of Psychology, Stanford University Description: Perhaps no one comprehends the roots of depravity and cruelty better than Philip Zimbardo. He is renowned for such research as the Stanford Prison Experiment, which demonstrated how, in the right circumstances, ordinary people can swiftly become amoral monsters. Evil is not so much inherent in individuals, Zimbardo showed, but emerges dependably when a sequence of dehumanizing and stressful circumstances unfolds. It is no wonder then, that Zimbardo has lent both his expertise and moral outrage to the case of U.S. reservists who perpetrated the abuses at Abu Ghraib prison.

Zimbardo's latest book, The Lucifer Effect, attempts to understand -how good people do evil deeds." His talk outlines his involvement as expert witness for the defense team of one of the military police officers responsible at Abu Ghraib, and also provides a rich history of psychological research into the kind of behavior transformations evident in Iraq. First, Zimbardo presents a slideshow of Abu Ghraib abominations, including some digital photos that were not widely distributed by the media. Then he digs deep into the archives for a horrifically illustrated tour of experiments that make a persuasive case that certain, predictable situations corrupt people into wielding power in a destructive way.

He describes Stanley Milgram's 1963 Yale-based research demonstrating that people will behave sadistically when confronted by -an authority in a lab coat." A vast majority of the subjects delivered what they were told were dangerous electric shocks to a learner in another room, to the point of apparently killing the other person. Researchers skeptical of his results replicated them. This time, professors demanded that students shock real puppies standing on electrified grills. Zimbardo's own prison experiment turned an ordinary group of young men into power-hungry -guards," humiliating equally ordinary -prisoners" in the basement of Stanford's psychology building. The descent into barbarity was so rapid that Zimbardo had to cancel the experiment after a few days.

The recipe for behavior change isn't complicated. -All evil begins with a big lie," says Zimbardo, whether it's a claim to be following the word of God, or the need to stamp out political opposition. A seemingly insignificant step follows, with successive small actions, presented as essential by an apparently just authority figure. The situation presents others complying with the same rules, perhaps protesting, but following along all the same. If the victims are anonymous or dehumanized somehow, all the better. And exiting the situation is extremely difficult.

Abu Ghraib fit this type of situation to a T, says Zimbardo. The guards, never trained for their work helping military interrogators, worked 12-hour shifts, 40 days without a break, in chaotic, filthy conditions, facing 1,000 foreign prisoners, and hostile fire from the neighborhood. They operated in extreme stress, under orders to impose fear on their prisoners. Zimbardo believes the outcome was perfectly predictable, and while never absolving these soldiers of personal responsibility, believes justice won't be done until -the people who created the situation go on trial as well: George Tenet, Donald Rumsfeld, Dick Cheney and George Bush."

About the Speaker(s): Philip Zimbardo began at Stanford University in 1968, having taught previously at Yale, New York University, and Columbia University. He continues teaching graduate students at the Pacific Graduate School of Psychology, and at the Naval Post Graduate School (Monterey).

He has received numerous honors, including most recently, the Havel Foundation Prize for his lifetime of research on the human condition. Among his more than 300 professional publications and 50 books is the oldest current textbook in psychology, Psychology and Life, now in its 18th Edition, and Core Concepts in Psychology, in its 5th Edition.

Zimbardo has also been a social-political activist, challenging U.S. wars in Vietnam and Iraq, as well as the American Correctional System. Zimbardo has served as elected President of the Western Psychological Association (twice), President of the American Psychological Association, the Chair of the Council of Scientific Society Presidents, representing 63 scientific, math and technical associations (with 1.5 million members), and now is Chair of the Western Psychological Foundation.Host(s): Dean for Student Life, Technology and Culture Forum